Not a word you hear very often in a song, not a love song. But his words rule my mind more than mine, and more than love.

If you think on a word long enough, you'll find yourself in oblivion. And I've thought on you so long, I'm lost.

No words, no words for you.

So goes my next song, the first from my next EP 'The Dark Hand of Love'. A magical, philosophical, more serious bunch of tracks that challenge the instruction I was given on vocal technique, song structure and style. I was told not to discuss themes that a wide audience wouldn't understand. I could think of no better way to start my first song than with the word Wittgenstein.

Wittgenstein doesn't have an obvious place in musical territory given that he was an analytic philosopher of Maths and Logic; except that Brahms was a regular at his home in Austria; he would listen to music with the same fury he puzzled over Logic; and he was a mystic. Suddenly, we are not so dissimilar. 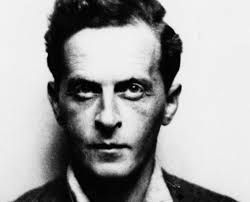 I came across him at school, around the same time that I lost my singing voice. Maybe because I was suddenly not able to communicate any longer through my natural voice, I found conversations about meaning and language poignant. His theory developed from book to book, but generally the journey is: a) the world is the totality of facts so words have meaning so long as we can picture them in our minds; b) then later that pictures aren't as important as how words are used in language games, so meaning is determined by use; c) and finally at the end of his life, he went on to distinguish between absolute certainty and absolute knowledge as being categorically distinct, thereby evading most of the problems that philosophers like him grapple with.

Philosophy had its place in my life at one time: I used it to find my voice again; but that is a bigger story for another time. I don't need Wittgenstein anymore; but when I find myself lost, his words come to me.